Rockhoppin’ Charters entered a team in the 2015 Painkiller Cup that took place last Saturday, January 17th. It is a 14 mile downwind race from Beef Island, Tortola to infamous Soggy Dollar Bar on Jost van Dyke. Well, it was supposed to be a downwinder but last weekend there was very little wind (7 knots) and the water totally calm – very strange since it had 25+knots the days before – so it was a hot, long, hard paddle for the over 50 riders.

The Painkiller Cup is a team race for 3 paddlers, 2 men and a woman who take turns paddling 25 minutes each, sharing a board and switching from an escort boat. The total prize money is 10.000 US$. On top of this there is the Mini Painkiller Cup, which is shorter, from Sandy Cay to Soggy Dollar. 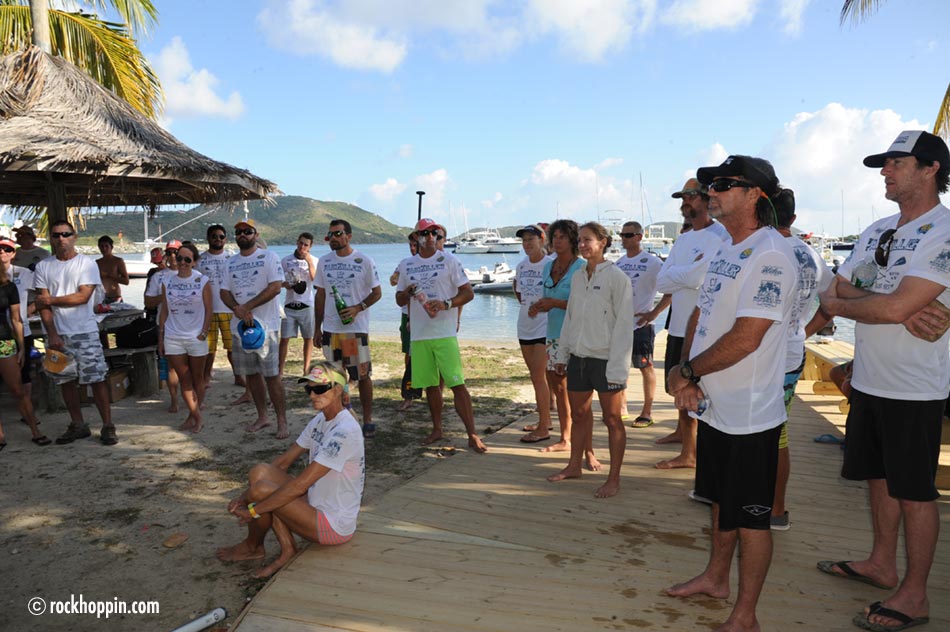 Team Rockhoppin consisted of Captain Steve riding the boat, the 2 male paddlers were Patrick from Massachusetts and Mike from South Carolina who have done the M20, one of the most gruelling ocean races twice and once. The female paddler in the team race was Kim (Massachusetts), who has done the 34 mile Cape Cod crossing 4 times. Petra, who has done the Painkiller Cup solo in 2012 and won the 2014 Mini Painkiller Cup was going to start in the Mini Painkiller Cup, that is if she made it there on time.

The escort boat was of course our 32 FS Regulator. The Mini Painkiller Cup was supposed to start at noon when the first Team passes Sandy Cay. That would be a challenge to get to the start, should the team not be leading, but Petra trusted the twin Yamaha 250s & Captain Steve and decided to ride along with the team instead of taking the committee boat. Also on board were Bruce, Kim’s husband and Owsen Corbel from Caribbeanpaddling on St. Martin who helped Petra with taking photos. We headed to Tortola the day before and decided to go to bed at Sebastians / sleep on the boat that was moored at Soper’s Hole instead of joining the party at the Last Resort, so naturally we were the first boat to arrive in Trellis Bay. The ride over was an amazing sunrise ride. 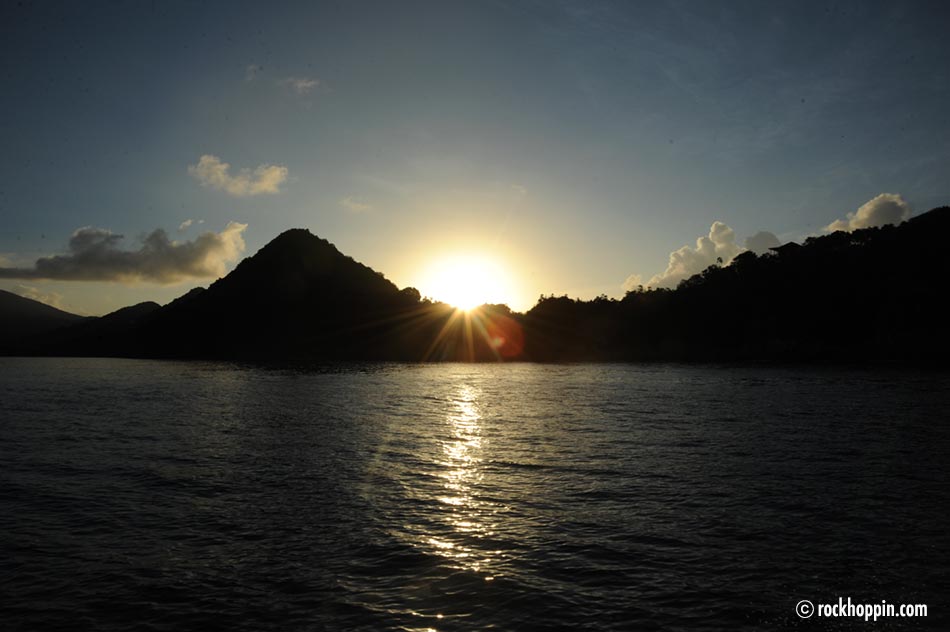 The race started at 10:00 AM in Trellis Bay/Beef Island and Team Mexico was off to a great start. The team featuring Javier “Bicho” Jiminez, Ryan Helm and Shelby Taylor dominated the 14-mile course. Just about 3 minutes behind the Mexican’s was Team Limin from St Croix.  Limin was pushed hard by another Cruzan team Freedom City Surf Shop. “We pulled ahead of Freedom City off of Trunk Bay on Tortola’s North Shore” explained Limin captain Bill Kraft. It was neck and neck with them during the first two rotations but Isabelle managed to inch ahead of Jessica Rando and then we stayed just ahead of them after that”. 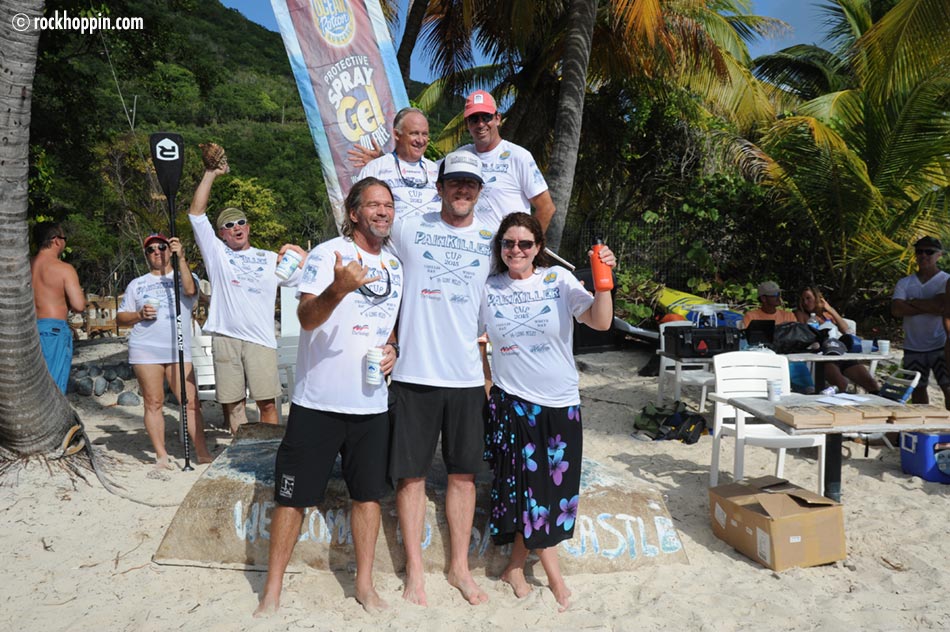 There was no chance catching the leading teams but Team Rockhoppin (pictured above) kept steady in their 7th place on the 14′ Fanatic Falcon from Sup-Stjohn.com. After another switch it was 11:40 AM and Sandy Cay was still a few miles out, so Captain Steve raced Petra to the Solo Race start and then raced back to catch the rider just in time for the next switch. 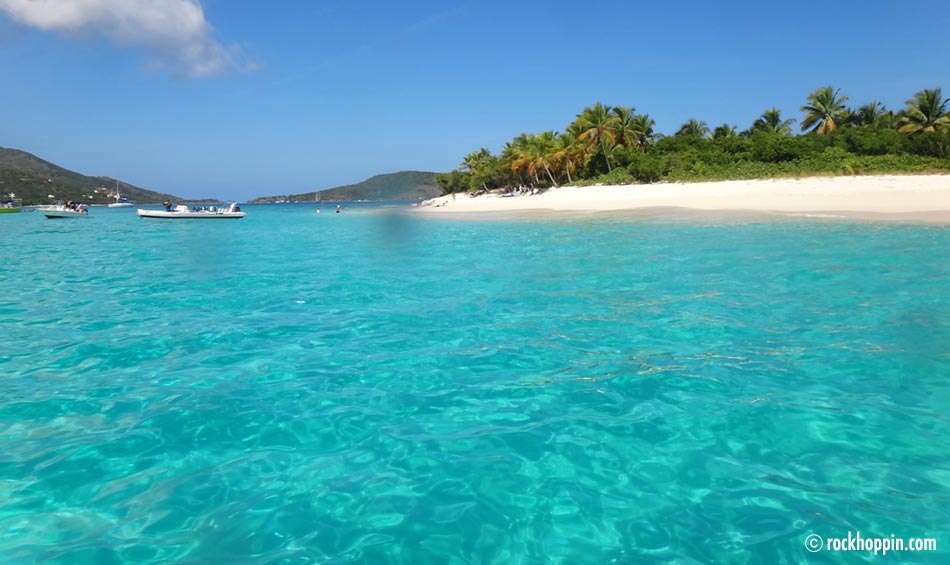 The Mini-Painkiller Cup course from beautiful Sandy Cay (pictured above) to the Soggy Dollar Bar had 17 SUP riders this year plus a new surf ski class. Tortola paddler Lee Donovan edged Rodrigo Dos Santos to win the solo race (both on 14’).  Petra (on a 12’6 Fanatic Falcon) finished 1st for the women and 10th overall.

The finish on Jost van Dyke was a true spectacle, there were so many boats in the bay, the riders’ could barely find their way through. There was no rule as to where to hit the beach with the board, the riders had to touch the blue Hiho flag in the sand, some decided to land way out to the right and sprint to the flag through the sand, others kept paddling towards the flag. In retrospect, the running was maybe faster. The amazing day then ended with the price giving and of course, many Painkillers for everyone, except poor Captain Steve of course, who had to ride the boat back to St. John. 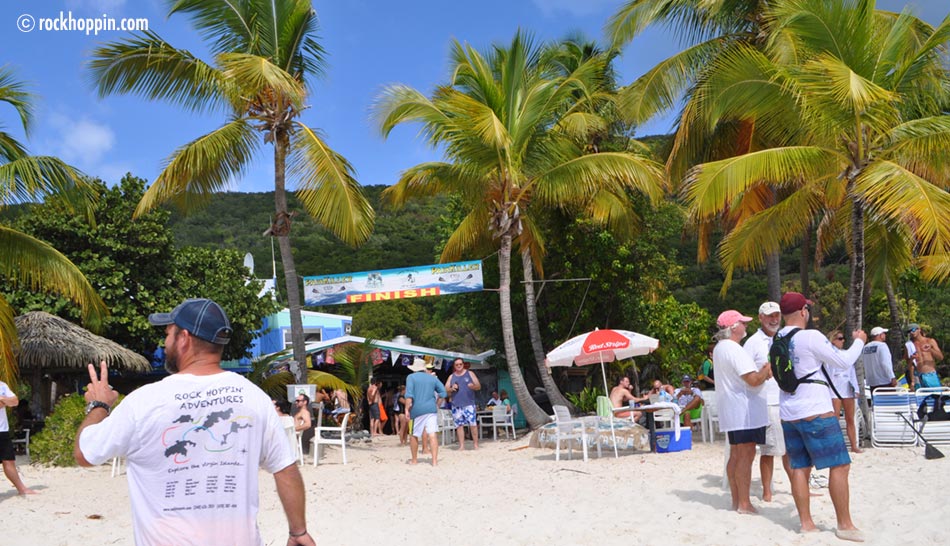 The Painkiller Cup event is sponsored by the Soggy Dollar Beach Bar on Jost Van Dyke, HIHO and Ocean Potion. Thanks for a great event!