Legendary Willy T. (Willliam Thonton) is a classic waterfront drinking establishment. Back in 1985 the owners, Mick and Annie Gardner, decided to open up a floating restaurant and bar on an old 100 foot wooden schooner.  They called it the William Thornton, Willy T. for short, and over the next 10 years it became one of the “must-visit” watering holes in the British Virgin Islands.

In ’96, the original wooden Willy T sprung a leak in the middle of the night and ended up on the ocean’s floor not long after.  Determined to rebuild, the owners went to Florida, bought a 120 foot steel ship and it soon became the new and improved Willy T back at the original mooring at The Bight, Norman Island.

Unfortunately Willy T. was destroyed in the 2 category 5 Hurricanes that hit the BVI and USVI in September 2017, but they owners quickly rebuilt it on a new boat and after a long sail to the BVI's arriving in May 2018 were declined anchorage at Norman Island. Read about it here. Thankfully they quickly found a new spot on Peter Island and have re-opened in June 2018.

AFTER BRIEF TIME AT PETER ISLAND WILLY T. IS BACK AT NORMAN ISLAND

below is a picture of the new Willy T., very similar to the old one but bigger and with lots of improvements.The environmentally conscious will be glad to hear they now also have septic holding tanks!

The Willy T is a party spot with their traditional island drinks are fantastic and always served with a generous pour of rum and a smile. Dark & Stormies, Rum Punches and Bushwackers are  the drinks of the day and as the afternoon wears on, shooters and body shots become a great source of entertainment and intoxication. It's a truly magic place where memories are made. 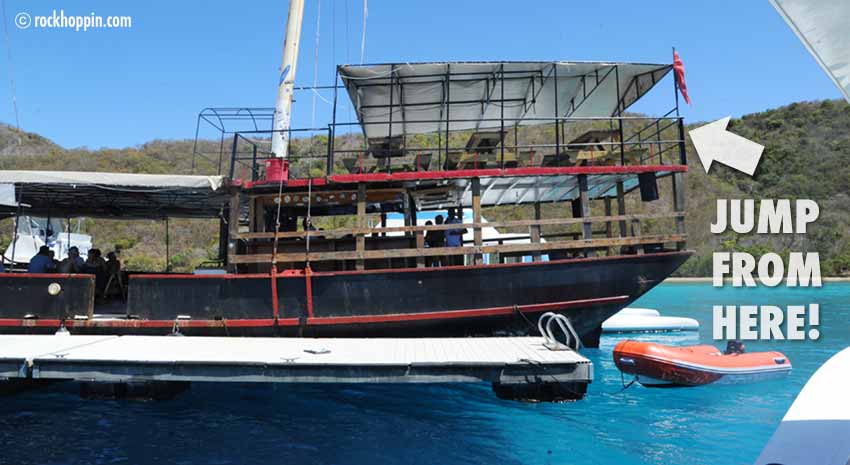 "R" rated jumps off the top deck, laughing, screaming, music, happy hour, all leads to a great time on the Willy T. A quick google image search will give you an idea of the party that is going on there every day. And check out the video below from the infamous jump off the top deck:

There is really good snorkeling close by at Norman ISland. You can snorkel the Caves, Indians (mooring/park fee applies), the Aquarium and Tektike on the way back if we go back along the St. John South Shore on the way back or you can skip snorkeling and stop at Jost van Dyke instead.

We can take you to Willy T. on our comfortable powerboat on a private charter. Willy T. is in the BVI so a passport is required. There is no customs on Peter island, so need to check it at Tortola Westend (or Jost van Dyke).

A day trip to Willy T. can be combined with snorkeling (Caves, Indians, the Aquarium) or we can stop on Jost van Dyke too. It can also be a part of a Cooper Island Day Trip.